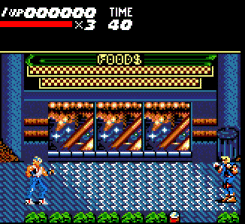 Streets of Rage 2, later released in Japan as Bare Knuckle II: The Requiem of the Deadly Battle (ベア・ナックルII 死闘への鎮魂歌 Bea Nakkuru Tsū: Shitō he no Chinkonka), and in Europe as Streets of Rage II with a Roman numeral, is a side-scrolling beat 'em up video game released by Sega in 1992 for the Mega Drive / Genesis console. The game is also playable in the game Sonic's Ultimate Genesis Collection. It is the second game in the Streets of Rage series, a sequel to Streets of Rage and followed by Streets of Rage 3. The game introduced two new characters: Max Thunder and Eddie "Skate" Hunter (known as Sammy Hunter in Japan), brother of Adam Hunter from the original game.

Though Streets of Rage 2 plays very similar to its predecessor it improves and refines much of the gameplay. The biggest change is the replacement of the original special attack, which was calling a police car to damage all on-screen enemies, with individual special attacks performed by each character, that depletes some of their health. Each character's move list has been expanded and edited to make them very individual to play instead of similar with different handicaps.

Enemies are also improved; all are given life gauges (previously only bosses used them) and names, and like the selectable characters, given bigger and more individual movesets. There are many new enemies, including bikers, ninjas, kickboxers and robots.

There are also changes to the weapons that can be picked up. The pepper shaker and the Bottle from the original game have been removed. The knife has been tweaked, so the player can throw it at will, whereas in the first game the it could be thrown by accident by the player. As a trade-off, the knife does much less damage when thrown in Streets of Rage 2. A kunai has been added, with the same functionality as the knife. The baseball bat from Streets of Rage is replaced by a katana, which performs the most damage of any weapon in the game.

Aside from the differences in weapons and enemies, the characters themselves are given some special abilities and handicaps. In addition to their traits and individual moves, the characters now have a "semi-special move": a powerful, non-energy-draining attack, performed by double tapping a direction and pressing punch. Also, Skate had the ability to dash when a direction is double tapped, a feature carried over to all characters in Streets of Rage 3.

The first of the three fat enemies in Stage 5 is named "Heart", as a reference to the popular manga Fist of the North Star (original Japanese name Hokuto No Ken), which featured an extremely overweight martial artist called Heart. Additionally, level 6 features an enemy named "Souther," another character from Fist of the North Star. The character Skate resembles the eponymous playable character from the game DJ Boy, another side-scrolling beat 'em up. This arcade game, developed by Kaneko, was later published by Sega on the Mega Drive. In fact, Sega changed the in-game name of the character from "Sammy" in Bare Knuckle 2 (Japanese release) to "Skate" in Streets of Rage 2 (U.S. release); American Sammy licensed the arcade game for U.S. distribution. Skate is the character's nickname in both incarnations; his first name in the non-Japanese versions is given as Eddie.

A year has passed since the events of Streets of Rage. To celebrate the defeat of the mysterious 'Mr. X' and his syndicate the previous year, Adam Hunter, Axel Stone, and Blaze Fielding met at their favorite nightspot in the city and spent their time reminiscing about their vigilante crusade against "Mr. X" and his organization. Axel and Blaze had moved out of the city after the adventure from last year. Axel has begun working as a part-time bodyguard and Blaze teaches dance classes. Adam has since rejoined the police force and lives in a small house with his younger brother.

The next morning, Axel received a phone call from Eddie 'Skate' Hunter, Adam's younger brother. Skate had arrived at home from school and was shocked to find his house in ruin and his older brother missing. Attached to the front door was a picture of Adam chained to a wall at the feet of Mr. X. The criminals began to retake the streets once more. Beatings and lootings took place regularly and in broad daylight. Chaos reigned in the city, far worse than before.

Realizing that Mr. X and his syndicate has returned for revenge against them and the city, Axel and Skate waste no time in telling Blaze about the unexpected situation and Blaze herself is determined to help Axel out in defeating Mr. X and rescuing Adam. Accompanied by Adam's young brother Skate and Axel's "friend," a professional wrestler named Max Thunder, Axel and Blaze set forth on a rescue mission, which will take them from the city all the way to Mr. X's hideout on a desolate island.

Unlike the other two games in the series, this game has only one ending, the "good" ending where Mr. X is defeated and Adam is rescued. The five heroes then take a helicopter to leave Mr. X's island.

In Japan, and in Europe, Streets of Rage 2 uses Roman numerals (Bare Knuckle II, Streets of Rage II) and Blaze's flying kick sprite was slightly edited to be less risqué. The Japanese version also shows Mr. X smoking a cigar, which was edited out of the EU/US version. The Japanese version gives Skate's first name as Sammy, but in the European and North American versions, his name is Eddie. The European version gives Max's second name as Hatchett; the North American and Japanese versions give it as Thunder.

In a beta version, available via ROM emulation, the game's first level is playable. It is semi-complete with moves, areas, rain effect and all sound effects missing. The bar area is much shorter and without breakable tables and chairs, and the Electra mini-boss is missing, replaced by a Donovan sprite named Singer. Barbon, the level's boss is scrambled when performing certain moves and will respawn three times upon defeat. After that, the player is stuck in the Boss Area. Max Thunder uses a completely different sprite set, giving him a more gorilla-like appearance. Axel's special moves were also changed for the final, in this beta he uses two attacks similar to Sagat's Tiger Uppercut and Ryu and Ken's Hurricane Kick from Street Fighter II. It also features a different background music (this one named officially "Walking Bottom"), more similar to the tunes found within Streets of Rage.

The Sega Master System and Sega Game Gear 8-bit versions of Streets of Rage 2 are quite different from the Mega Drive original, and to each other, similar to the Master System/Game Gear version of Sonic the Hedgehog, they are, in truth, different games. As well as different levels and the inferior graphics, Max Thunder is omitted from both. The Game Gear version does not show enemy names.

An arcade version of Streets of Rage 2 was released onto Sega's Mega Drive based Mega-Play hardware. It uses a regular credit system. In this version, all 1-ups have been replaced by money bags, there is no in-game timer and the difficulty levels are one step above the Mega Drive version. Scoring is kept by number of KOs, instead of damage inflicted.

Upon release, the game received critical acclaim and is considered by many to be one of the best games ever made. In 2004, readers of Retro Gamer voted Streets of Rage 2 as the 64th top retro game. The soundtrack got a lot of positive reception for its techno based tracks which impressed many gamers and critics at the time especially due to the audio limitations of the Megadrive/Genesis console. Most notably, the boss theme is considered one of the best boss themes in the 16-bit era and of all time. The reception for the soundtrack was so high that the games music composer, Yuzo Koshiro, was invited to nightclubs to DJ the tracks.